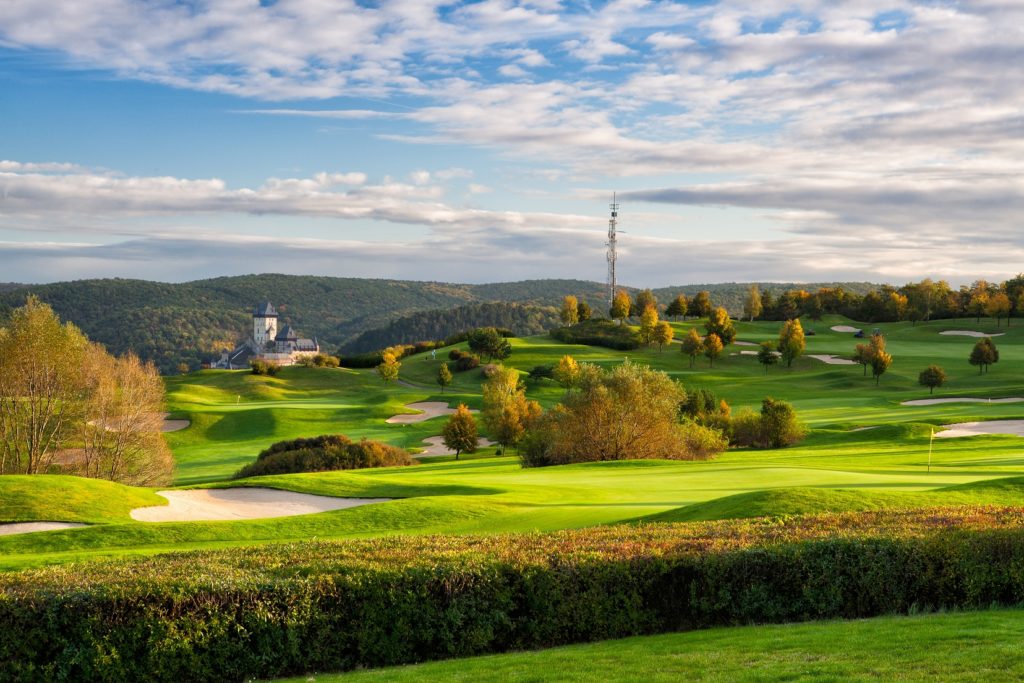 The first 18 holes of the golf course were officially opened in 1993. The course was designed by the Canadian golf architects Les Furber and Jim Eremko, who have come up with 70 golf courses around the world, including the famous Valderama in Spain and Varadero in Cuba. The golf course has been sensitively incorporated into a picturesque landscape, in which Karlštejn – the majestic castle of Bohemian kings – forms a romantic backdrop, to result in a unique work. The rugged terrain, natural ravines, two lakes and numerous bunkers create a very attractive environment that will please even the most discerning of players. In 1997, Karlštejn became the venue of a PGA European Tour event attended by many prominent golfing figures from around the world. It was won by Bernhard Langer with a result of 265 (-20) after four rounds. The Karlštejn course’s record was created by Swede Patrik Sjöland on 8 August 1997 with a second round 61 in the Chemapol Trophy.

In 2008, a further nine holes were added on the southern slope of Voškov Hill (South Course) to complement the original eighteen holes. This project was placed in the hands of the same two architects, and their design follows on seamlessly from the character of the first eighteen. The course has been designed to make the most of the natural strips of mature greenery. The individual fairways are located mostly on contour lines, the only exception being the second hole. Compared to the first two nines, the third nine is technically more challenging and some players will initially find it a hard nut to crack. The wooded hilly landscape with limestone rocks and rich fauna and flora is an oasis of peace and tranquillity, but is only a 45-minute drive from the centre of the Czech capital. When they were constructing the entire course, the architects’ main mantra was “easy bogeys but difficult birdies”. This philosophy has made it possible for players with very different handicaps to play together today.