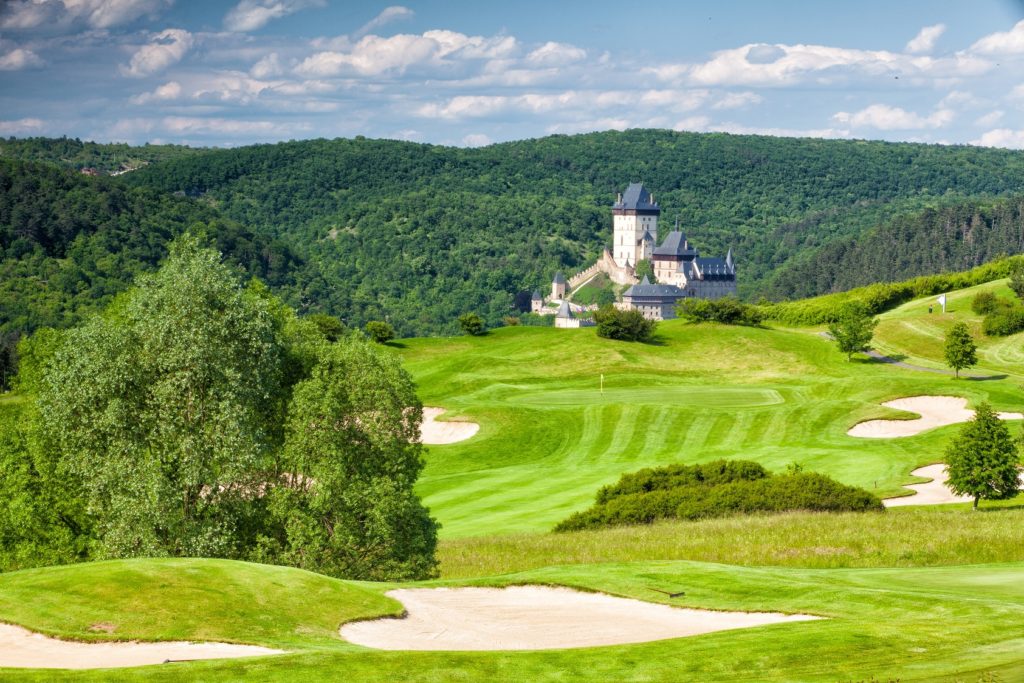 The only hole to be played from white tees. And right at the beginning of the round at that. The reason for the maximum possible length? If the teeing areas were nearer, players would find it easy to reach the green on their second shot, and this would result in congestion. Nowhere is it written, however, that you cannot try to shoot over the bunkers in the left dogleg and go for the flag on your second shot. This is highly tempting and a strategic challenge. Shoot? Or hold back? Come and watch, this is going to be worth it right from the off.

A dormant demon. That’s the second hole, which has seen many a showdown. The valley green used to be reachable in the first shot, but that was before water and trees sprang up in front of it. Professional golfer Alex Čejka’s redesign has made the hole much more difficult, so today’s safe route to the green leads through a fairway and a short pitch. The green cannot be seen from the tournament’s yellow tees. That’s not to say, though, that some won’t attempt to hit the green directly after reading the hole!

The only hole with the shortest possible length, to be played from red tees. The dreaded thirteenth hole is so difficult, elaborately shaped, and long, that there is no chance of reaching the green on the second shot. The double dogleg puts up a solid defence. After all, it has a difficulty index of 2. The green is surrounded by deep bunkers and not even a ball on the short-trimmed grass is a cert. The green runs towards the fairway and there are several drilling variants here to create problems. A par never spoils the result, and here it’s doubly true.

The otherwise formidable fourteenth hole should surrender because it will be played from blue tees, eliminating the water on the right side. The nice length, however, does not mean that everything is cut and dried. Lurking at the green are three bunkers, which, given the length of the hole, should not come into play, but then there is the green itself. The players will find themselves on an inclined surface here, despite doing nothing wrong. And it is up to the referees where the hole will sit. The closer it is to the front edge of the green, the worse the putt that awaits. Precision will win the day.

The penultimate hole stretches uphill like a caravan passing through the desert and seems endless. The green is practically unreachable on the second shot from the blue tees. So, once again, you need to stay respectful and calm. The third shot is deceptive. The raised green is not visible and everything depends on an accurate estimate of the distance. If drilled in the front, putts from longer shots will go run downhill, creating another puzzle on the way round the Karlštejn course. A par, again, should be viewed as a victory, before you quickly make your way out of there.

A bit of enticement at the end, but not completely. You can shoot over this right dogleg with bunkers from the blue tees, but if there is a headwind, you’re better off clinging to the left, a safe area on the fairway. The second shot, between 100 and 150 metres from the green, rises slightly to a complexly shaped green with a distinct ridge. This sometimes results in quirky drilling, with a three-putt common even from a short distance. The goal here tends to remain very aloof.