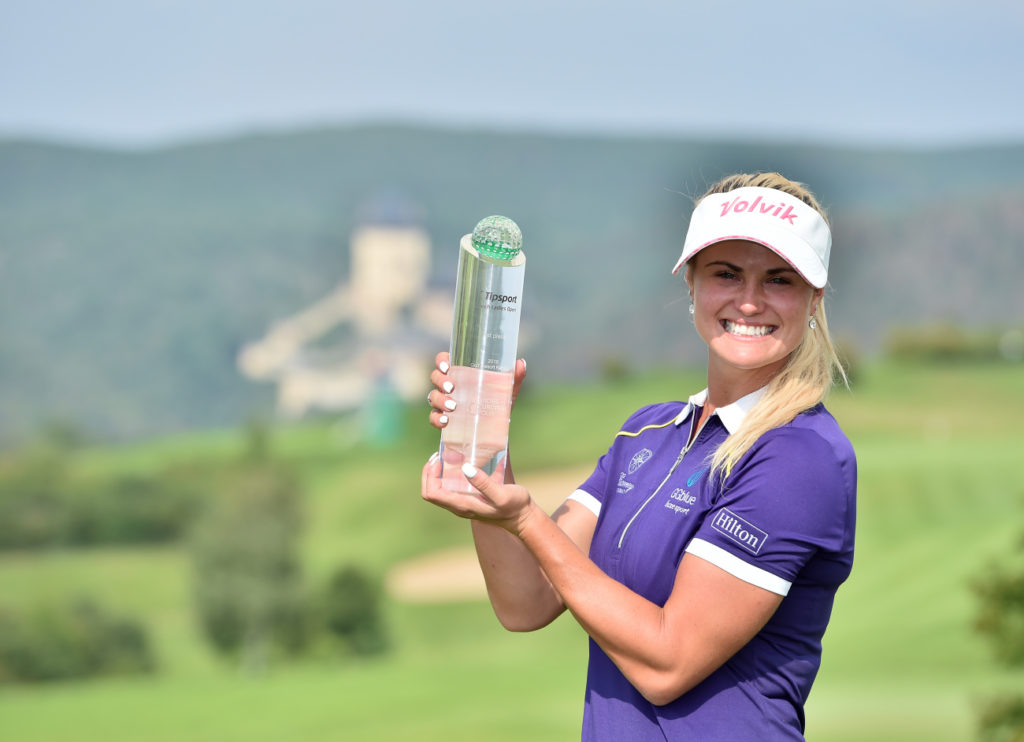 Ten months of preparations were needed so that everything ran like clockwork without any organisational problems over the three days. The first year of the Tipsport Czech Ladies Open at Golf Resort Karlštejn worked out even better than expected, golfers from twenty-five countries in the world played three rounds and praised its arrangements and the wonderfully prepared course on the spot; thank-you e-mails are still coming in. But what had to be got ready before, on Sunday afternoon, Carly Booth raised the cut-glass trophy over her head to great applause from the spectators?

10 Months, 71 Members of the Organisation Team

Karlštejn Castle, opposite a course built in the first half of the 1990s, is, by itself, a great backdrop for such an important sports event. It is no wonder that the wonderful medieval structure was mentioned in articles in which foreign media summed up the three-day battle for the tournament on the Ladies European Tour, which exceptionally joined forces with the LET Access Series for this tournament.

Let’s summarise in terms of numbers what was needed to keep the tournament running smoothly.

In the end 71 members of the production and organisation team worked on the tournament itself, 14 people came directly from the Ladies European Tour. For example, the team working only on online scoring had twelve members. 14 vehicles, including vans that transported the players constantly between the hotel and the course, were permanently in operation.

Such a quantity of personnel, guests and, understandably players and their escorts, also consumed a significant quantity of food and drink. Eight thousand half-litre bottles of water were drunk during the tournament week, 500 lunches were prepared at Karlštejn every week. And to this we should add Wednesday evening’s very successful players party, which was attended by 270 persons.

The Karlštejn course was in a great condition for the whole tournament week. “I play at Karlštejn relatively often, but I’ve never seen it so wonderfully prepared. I actually never thought that I’d see it like this,” said local member Patricie Macková, the best amateur and Czech at the tournament, who finished twelfth, of the preparations at the local resort.

The view of the course was also unusual for the local members for a reason other than the work done by the greenkeepers. Because of the Czech Television broadcast, there were 14 cameras, in six cases they were on unmissable towers. And between them there were five kilometres of cables that connected them to a broadcast van in the rear.

During the installation ČT took aerial shots of the golf resort, during the playing days it made audio-visual recordings with a reporting staff. The same staff, in addition to other things, processed material for a 25-minute-long documentary, which maps the course of the whole event and will be broadcast on Thursday, 29 August (16:40). The material was processed in an editing room, which was connected to the broadcast van and also served for sending news bulletins from the place in question. The whole tournament was broadcast by satellite.

TCLO social networks contributed to the attention the tournament generated—primarily 60 posts on Facebook and the rising mentions they generated showed that in its first year the tournament won deserved attention. This is shown by 231,807 views, as well as 1,166 replies. In addition, 63 players starting at Karlštejn shared or replied to posts from the tournament on their social networks for their own fans. To give you an idea—the winner Carly Booth has almost 160,000 followers on her Instagram account.

The Tournament in Tipsport Bets

The tournament was also paid great attention by its titular partner—Tipsport, which is based in nearby Beroun. Gamblers are still getting orientated in the performance of Czech women golfers, because they don’t have frequent opportunities to bet on such a large quantity of domestic players. However, there are plenty of those that tried to make use of their knowledge.

138 players from 25 countries (124 professionals + 14 amateurs)
17 Czech golfers at the start (5 + 12)
71 people in the organisational team
14 vehicles
600 m2 of advertising space at the course and in the surrounding area
8,000 bottles of water drunk
500 lunches every day
-11 score of the winning team (Sanna Nuutinen) in Pro-Am
Statistical Data from the Tournament