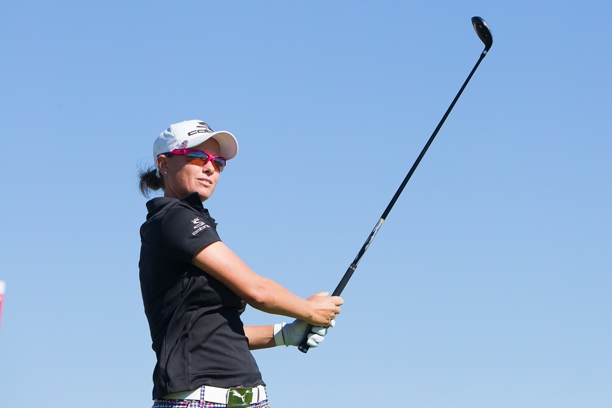 South African (39) who studied psychology in the United States can be proud of titles from both Ladies European Tour and American LPGA. Before she won at Blue Bay LPGA 2014 in China she had had a wonderful season 2010. That time she won five times in Europe and became the Player of the Year as well as in 2013. She has nine European victories and twelve wins in her career altogether. She finished second at Dýšina LET tournament in 2014. She fully dedicated herself to golf in her eighteen. She has been a professional for fifteen seasons. She likes to read and play water sports.

Nineteen-year-old Sweden had led the European Order of Merit ladder before the season was interrupted. She won NSW Women’s Open in Australia and she finished seventh in two other competitions. She did not pass the cut last year at Karlštejn but at the end of the year, she finished on the third, fourth and fifth place at LET and this year she belongs to the favourites. She finished fifth during her first professional season in Morocco and she became the Newbie of the Year, also she won twice at LETAS tour. She is the youngest winner of Ladies British Open Amateur Championship (2016) and the champion of European Teams (2017)

The winner of three tournaments and also the whole order of Order of Merit 2016 (as the first American in history), with help of two titles from six positions in top ten. She started to play golf when she was sixteen. She tried LPGA with her best result being the 23rd place. She won for the first time at Ladies European Masters 2015 in England. Last year she was twice in Top Ten, sixth in Kenya and ninth in Thailand. Her father is a PGA professional, she gave her ill brother a kidney. Born in San Diego, CA she now lives in Scottish Glasgow.

Since her transfer to professionals in 2009 this Englishwoman has played over 200 LET tournaments. She won three times. She represented Europe in Solheim Cup 2017 where she got thanks to her victory at Estrella Damm Mediterranean Ladies Open play off in Spain. One year earlier she finished third in Order of Merit after eight positions in Top Ten. In 2015, she was the fifth at Pilsen Golf Masters. She played an albatross in finale of Ladies Italian Open 2014 during her journey towards her second title. She was born to her English parents in Germany and she still lives there.

Extremely talented Slovenian is only 16 but she already amazes amongst professionals who she joined this year after a transfer from Q-school. Last year she debuted at LET in Karlštejn with excellent rounds of 67 and 71 until her unfortunate finale with a score of 78 gave her her 31st position. This year she finished seventh at Women’s NSW Open in Australia. In July she won 3 strokes among men at Slovak PGA Championship in Black Storko! She started to play golf when she was three. In her twelve she passed a cut at LETAS tournament. She was fifth at world WAGR ladder and she had a handicap of +7,0.