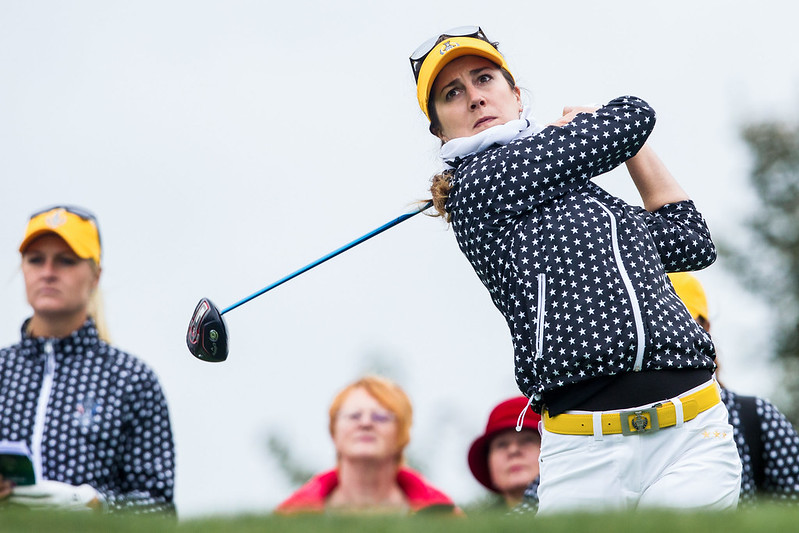 Born into a Czech family in Germany in 1985 where she left to study and play golf in the United States, and recently obtained US citizenship. In the meantime, Sandra GAL became an LPGA winner, represented Team Europe in the Solheim Cup twice, and won the Czech International Amateur Championship in 2007. Now she is coming back to the Czech Republic to compete for the first time as a professional at the Tipsport Czech Ladies Challenge (June 25–27 at GC Beroun), the fifth event of the Ladies European Tour this season. This is going to be her first start after dealing with medical problems.

You are playing in Czechia for the first time in fourteen years and as a professional. What does it mean to you?

I am happy for the opportunity to play here at Beroun in front of the Czech audience and also my parents. I met with the promoter, Mr Lubos Kozeluh, and we arranged everything pretty quickly. I am currently on a medical break at the LPGA Tour, but I can enter two events at the Ladies European Tour to see my readiness to compete again. After this event, I am going to the Netherlands and then I would like to return to the LPGA Tour which will come to Europe; the UK and France.

What are your memories about the Czech International Amateur Championship at Golf Resort Cihelny?

I won, so I had to play well. I remember I made a lot of birdies, and my putting was good. Later that season I turned professional after securing my LPGA status in the Q-school.

You have been dealing with some medical problems in the past few years. What is the cause?

I am not exactly sure, it was not just one thing. I think it was the result of the many years living my life on tour which is heavy on travelling, bad eating habits and lack of resting. My body got filled up with toxins and the pesticides from the golf courses did not help either. I had no energy, could not sleep, and felt a lot of stress. Playing golf during such times was not healthy for me.

Getting back to the tournament mode, does it mean your health has gotten better?

Yes, by a lot. I have changed my eating habits, improved my fitness and I feel more energetic, sleep better, and feel calmer. I try to play golf three to four days in a row, just like we do during tournament weeks. I go to the sauna a lot and harden myself off.

Did you watch the Ladies European Tour and the Tipsport Czech Ladies Open last year?

Yes, I did and the scores were very low in Beroun. Hitting it far is not my number one priority, but I am excited to play the scoring par-five seventh and eighteenth. I like the golf course and I have practised there a lot over the last week, I have played off the tournament tees and I have been liking the results. As for the LET, I notice the competition is getting tougher. The experienced Lee-Ann Pace won the first tournament of the season in South Africa and then in France, young Pia Babnik secured her maiden win. So, anyone can win.

What do you think about the Beroun Golf Club?

The golf course is getting in better shape every day. I am looking forward to every round.

Do you watch the Czech players?

I will play the practice round with amateur Tereza Kozeluhova. She made the cut earlier this season in Italy and also last year here at Beroun. I am excited to talk to her about that.

What are you excited about besides golf?

I want to enjoy a nice summer in Prague. Go to the city centre or the botanical gardens. I also like Beroun, the beautiful forests around the city and the fresh air… It is different as opposed to Florida where I live, and I love it.

You like to paint and play the violin. Did you bring a palette or your instrument?

I have missed painting and I have brought my equipment. But I left my violin in the US.

You will also enjoy the luxury of sleeping in your own bed during the tournament. What are some other things you can benefit from?

I try to eat clean, but I must admit that when I came to Czechia, I had svickova, a typical Czech dish, and crepes. Although not on the same day! Since then, I am back on track with healthy eating.

You are basically Czech, but also German and you just obtained your US citizenship. How do you feel about that?

I still cannot believe I am an American now, it is a strange feeling. My nationality is still European, but I cannot ignore the fact that I have lived in the US for the past 17 years. The flag next to my name will always be German and Prague and Czechia, in general, will always have been my favourite place to visit since I was a kid.