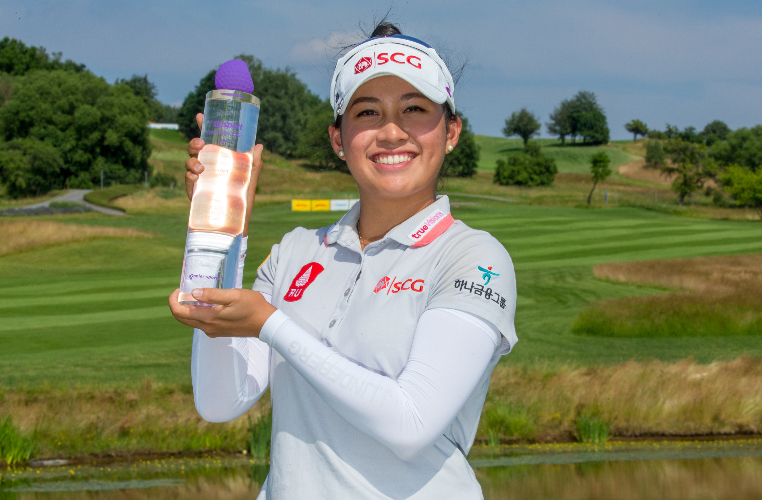 Thailand’s Atthaya Thitikul shot a stunning final round of 65 to win the Tipsport Czech Ladies Open by one stroke and secure her third LET title.

It was the 18-year-old’s first win on the LET as a professional after she previously won the 2017 and 2019 Ladies European Thailand Championship while still an amateur.

Thitikul, who began the day on eight-under-par, got off to a difficult start dropping two shots in the opening four holes but bounced back with three consecutive birdies.

The teenage sensation rolled in another birdie on the ninth to make the turn in 34 and followed that up with two more birdies on 10 and 11.

The Thai star was not finished there as she made another three birdies in her final four holes to set the clubhouse lead of 15-under-par, which was enough to seal victory.

“I am so grateful for my first win outside of my country. I came close to a win on many previous tournaments, and I finally did it, it means so much to me! I am so proud to be able to represent my country. I understand my game which helped me a lot today. Nuria played some great golf this week and I know her time will come again in the future.”

Spain’s Nuria Iturrioz had another excellent day carding a bogey-free round of 68 to add to her 66 and 68 in the first and second rounds, respectively.

Heading down the last, the three-time LET winner knew she needed a birdie to force a playoff and went for the green in two on the par-five 18th. She flew the green, had two putts after her pitch shot and made a par to secure second place outright.

“This is golf, a few putts did not drop today, and it was really tight, just by one shot. I am happy even though I did not win. I do not think luck had anything to do with it and this will only encourage me to practice more and get better,” said the runner-up.

Germany’s Leonie Harm was a shot further back having had a phenomenal start to her final round, which saw her make the turn in 30 with six birdies.

However, Harm had a tricky start to the back nine with a double bogey and two further dropped shots, but she steadied herself making two birdies in her final four holes to claim third place.

Pia Babnik, who leads the 2021 Race to Costa del Sol, carded a 67 and ended the tournament T6 alongside Finland’s Sanna Nuutinen – who delivered the best round of the day after she shot a 64 including a hole-in-one on the par-4 ninth.

“It took some time for me to realize it went in because a par-four is not your everyday hole to make an ace. I played with Sarah Schober and she started yelling ‘get in the hole’ and I just laughed at that. Then she saw it disappear and I saw people going crazy. But I still could not believe it until I got to the green,” said the Finn, who received a watch that was originally meant as a hole-in-one prize on the par-three seventeenth. The company owner decided to give it to Nuutinen as a hole-in-one on a par four is an exceptional achievement.

Thitikul leapt up the standings to fourth spot with 624.17, while Nuutinen is just behind in fifth and Harm in sixth.