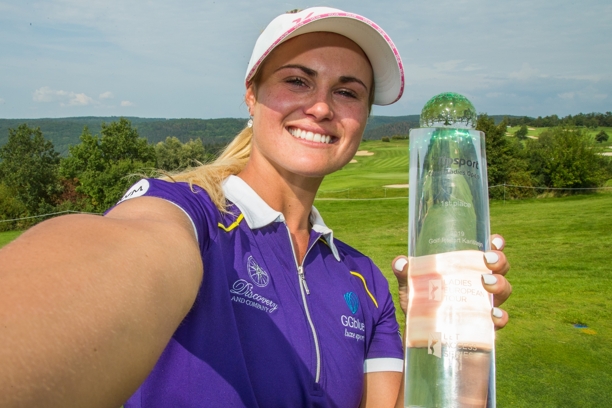 Exactly three months are left until the Tipsport Czech Ladies Open starts and the Ladies European Tour tournament in Beroun can already announce the first big names. The trio of stars Pia Babnik, Carly Booth and Johanna Gustavsson are among the lady golfers entered.

Only 18 years old, Slovenian Pia Babnik is already the winner of two LET tournaments, having won the Jabra Ladies Open in France and the Aramco Team Series individual standings in Saudi Arabia last season. That tournament was played on the Royal Greens course, where Kristýna Napoleaová shared a sensational second place last Sunday. Babnik got her first chance to play on the Ladies European Tour in the Czech Republic, at the first Tipsport Czech Ladies Open in Karlštejn. Babnik finished second in last year’s Race to Costa del Sol overall standings behind the winner of the Beroun tournament, Thailand’s Atthaya Thitikul.

Carly Booth is also happy to be back in the Czech Republic, having won the last of her three Ladies European Tour titles at the Tipsport Czech Ladies Open 2019. The youngest Scottish player in the LET’s history, who qualified for the tour at the age of 17, will turn 30 three days before the start of the tournament in June.

Sweden’s Johanna Gustavsson took a solo second place from Kristýna Napoleaová at the Aramco Saudi Ladies International on Sunday, when she converted a long birdie putt on the last hole to finish at 6-under par, the same as the Czech pro. For the 29-year-old Swedish player, it was also the biggest success of her career, in which she has won two LET Access Series tournaments so far. Gustavsson is planning to get married in May, so the Tipsport Czech Ladies Open will be one of the first after a big step in her life.

The Tipsport Czech Ladies Open will take place from 24-26 June at Beroun Golf Club with prize money of € 200,000. Among the expected ten domestic players will be the long-time Czech number one Klára Spilková, who is playing on the American Epson Tour this year, as well as three LET regulars: the new Czech number two in the world rankings Kristýna Napoleaová, Tereza Melecká and Šideri Váňová, and other young players, Sára Kousková and Tereza Koželuhová. Live coverage of all three days of the tournament will be broadcast by O2 TV Sport, which holds the exclusive broadcast rights to the Ladies European Tour 2022 and 2023.